Lowering your energy costs with innovation

I've spotted an article published and recently updated by Jisc about ICT energy costs reduction which stated that universities and colleges spend about £147 million a year just in ICT related energy costs.

The article rightly recommended various methods to save energy but there is a limit to what it can be saved if organisations keep using the same tools. While I agree with many of the recommendations present in the article I think that Jisc forgot mention an important one before promoting its own Cloud services.

Changes needs to be made in the education sector, like many other sectors, and probably we can find the solutions where efficiency matters the most. 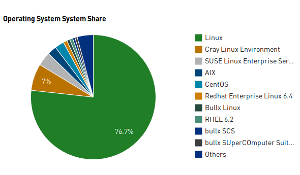 The solution is staring you in the face

The vast majority of services provided on what people call the Internet or "Cloud", most of the supercomputers, research centres and university data centres where financial resources are often limited, most of the devices used in mission critical situations and even your mobile phones all have the same thing in common: they all run on Linux and Open Source applications.

There are many reason why Linux has been chosen as the base for so many and diverse applications, including:

Looking at Jisc's article supporting documentation, that goes back to 2008, Linux is not mentioned at all but there is a brief reference to "different software that can have different energy consumption". Looking through the notes I found the link to the article it was referring to which talks about Linux being better than Windows 2008 with power saving measures (I don't know why Linux hasn't been mentioned and fully investigated as a valid alternative to Windows and Cloud but naturally we cannot doubt the fact that Jisc is a vendor neutral organisation).

That Linux is better than Windows 2008 in saving power during idle period is OK but, generally, people don't buy servers to keep them in idle state. Is difficult to find recent efficiency comparison between Linux and Windows server workloads as the issue has been settled a long time ago showing that for the same type of workloads Linux and Open Source are the best choice.

Even Microsoft itself runs popular applications like Skype and Yammer on thousands of Linux servers instead of Windows so if you believed for many years that Windows was the best choice then keep following Microsoft's example and start using Linux.

Keep always in mind that while hosted applications and renting someone else's computers, or in simple terms using the "Cloud", may seem a good idea it may not help you at all as you'll just pay somebody else's electricity bill together with their costs and profits. Evaluate which services can be upgraded to work with Linux and consolidate workloads first, then you may finally see that Cloud is not as efficient as you thought.

How much energy could be saved by switching from Windows to Linux?

Difficult to say but in many cases I've seen even small organisations deploying Windows to run their email platform, file sharing and a few other applications on servers that consume as much energy as a small electric oven. Equivalent solutions can be run on Linux servers that use a little more energy than a laptop and the users won't see the difference between the two. The only person that will see the difference is the one that have to pay the bills.

In a few universities I've noticed that email, storage and web services for students are all run on Linux systems while the staff and professor use Microsoft products. The result is that, in a case I've seen, 2,000 staff use the same amount of resources that are required to provide the same services to 12,000 students. Why duplicating infrastructures and costs when both staff and students can get top quality services from an efficient and reliable Linux platform?

Is not easy to be Green

It's probably a lot easier to renew the usual Enterprise Agreement and maybe deploy Office365 as it's "free" (if your school purchased a campus Office licence) but that just moves high costs around, it doesn't allow for long term savings and it creates a situation where it will be even more difficult over time to freely move to more suitable technologies.
Then training students using closed source products will just create a new generation of consumers not a generation of creative and inquisitive minds that will be the new driving force of our society.

The Education sector is supposed to be run by the brightest minds available to form our future CEOs and scientists so it should be the first to lead by example and show students that with a small effort is possible to create innovation, efficiency and savings.

As Jisc is funded by taxpayers they should probably work less in promoting discounted licencing schemes from the usual vendors and update their research, test various Linux and Open Source solutions and publish a list of suitable alternatives to less efficient closed source applications allowing the Education sector to spend more money on students instead of wasting it on licences and electricity bills.