A smart way to do VDI

NComputing VERDE is the only desktop virtualisation infrastructure designed from the ground up to provides you with all you need to deliver fast, cost effective and dependable VDI services for both Windows and Linux desktops.

The traditional approach to VDI offered by VMware and Citrix is too complex and expensive to deliver efficient desktop virtualisation to most organisations. Some may have large budgets allocated to their IT operations but is it really necessary to throw lots of money at an issue that could be solved quite easily?

It’s time for a new approach. VERDE (Virtual Enterprise Remote Desktop Environment) is a complete desktop virtualisation platform that removes the complexity and the cost traditionally associated with other VDI offerings.

NComputing VERDE covers all your requirements 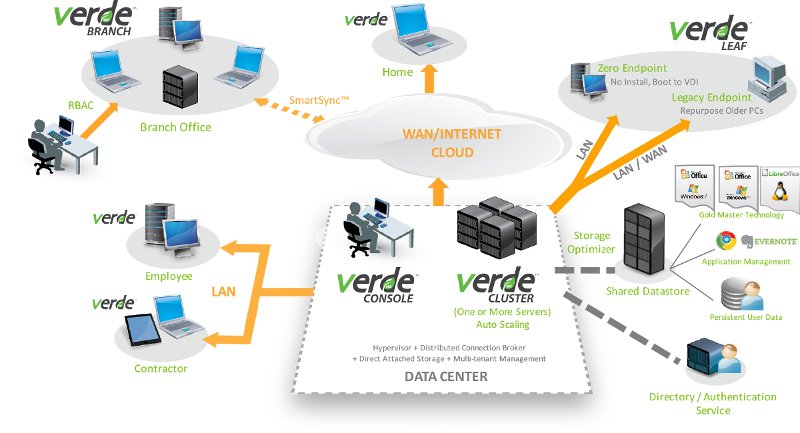 In very simple and clear terms with VERDE is finally possible to implement a Virtual Desktop Infrastructure which satisfies all your needs with a CAPEX that can be 60% lower than competing products.

Your investment pays off quickly with efficient use of your servers, all-in-one pricing and workload optimization between Windows and Linux.
Read More
VERDE VDI, is an end-to-end virtual desktop infrastructure and management solution that combines VDI, offline VDI and VDI remote branch solutions to remove the management burden, complexity and cost traditionally associated with desktop virtualization solutions.

VERDE VDI offers unified management and reporting through a single console and is adaptable for today’s dynamic environment. Ideal for companies of all sizes, VERDE VDI can scale up to ten thousand clustered servers or scale down to a single-server configuration.

Through a combination of better hardware efficiencies, more attractive all-in-one pricing, the ability to optimize workloads between Windows and Linux, and incredibly easier management, VERDE VDI is by far the best ROI among the competition.

VERDE VDI was built organically, from the ground up by security professionals. Which is why its preferred by the likes of the NSA, CIA and CSEC.
Read More
VERDE VDI has a long history as a preferred secure desktop platform with demanding users like the NSA, CIA CSEC and others. And for good reason. VERDE VDI is secure on a number of levels.

Being built organically from the ground up gives us a much more deterministic architecture as opposed to the cobbled-together monstrosities from our competitors, which not only make their solutions complicated and difficult to manage, but also introduces inherited code and architectures from smaller, acquired companies bought to plug the holes in their offerings.

VERDE VDI starts with a solid, secure Linux foundation. It then incorporates a dynamic provisioning model that makes users more impervious to malware by making unsanctioned changes non-persisting. We even go so far as to give admins the ability to set permission on USB devices by model and serial number.

If you identify only this make/model of drive authorized on this device, then any attempt to copy info to a non-authorized device will be blocked and logged. VDI in general offers tremendous security improvements over traditional desktops, but VERDE VDI takes this security to a whole new level with innovations we have developed over a long relationship with many demanding users.

VERDE Cloud Branch is a revolutionary architecture that addresses the shortcomings of VDI, providing fast access from anywhere.
Read More
VDI, as promoted by our competitors, has gotten a bad name from its inability to be successful outside of headquarters.

VERDE VDI has an innovative capability that uses caching and differential updates, among other techniques, to effectively “akamaize” VDI, cache it at the edge for easy, quick access, but without requiring any local management/administrator involvement.

The major benefits of this approach in addition to eliminating WAN latency, is business continuity – if the external network goes down, all the local apps will keep working without interruption. It also reduces network bandwidth as the applications are all communicating over the LAN and seldom need to go out over the WAN for normal desktop application usage.

Schools, campuses, branches, regional data centers, mission isolation, etc. all benefit from this architecture. VERDE VDI is a perfect solution for bringing the benefits of VDI to these user populations.

VERDE VDI is the best way to support Linux. We give it equal status. No special plugins or workarounds. We treat Linux as an equal citizen with Windows.
Read More
Our competitors continue to avoid reality and disregard the prevalence of Linux in mainstream corporations. VERDE VDI embraces Linux, providing a seamless environment for serving Linux desktops of all stripes and configurations, side-by-side with Windows.

But we go further than just serving up desktops. Lets say I have to do a compile job once a month, needing multiple cores to finish in a reasonable amount of time. I don’t have to have a beefy workstation sitting idly all month waiting for that job to call upon it. With VERDE VDI there can be an instance available to the engineer that can be called upon when needed.

Resources will be carved out of the existing pool to handle the job, and then returned to the pool when complete. Does that sound familiar? Sound like cloud? Well, yes.

VDI has a cloud-like architecture and allows organizations to reconfigure on the fly depending on the needs of the moment. In a Linux desktop user population – research, engineering, CAD, military, intelligence, etc., VDI is a huge advancement in flexibility, cost optimization and security.

While VERDE offers a wide range of features and covers all your VDI requirements is also very easy to manage and it needs a very simple architecture. Thanks to its Storage Optimizer technology there is no need to invest in complex SAN or I/O accelerators, all you need is a simple and inexpensive NAS.

With VERDE is also possible (and easy) to create hybrid configurations with in-house VDI and Cloud based DaaS.

For more information watch the video below, download the pdf VERDE VDI Datasheet (192 KB) and contact us. 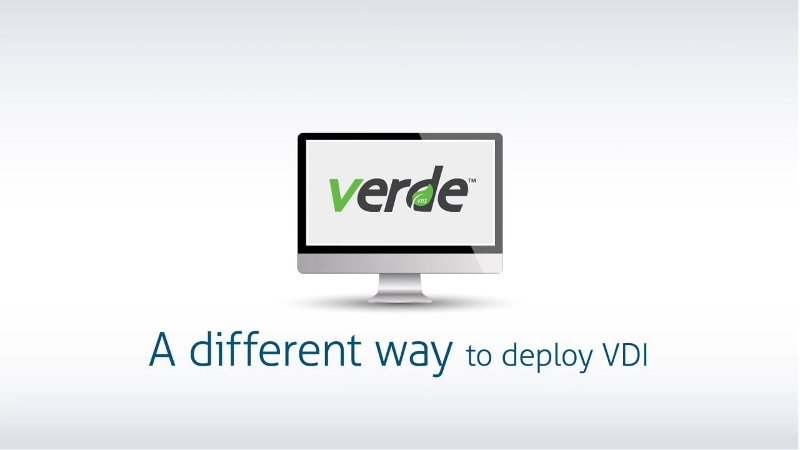